On our early morning drives into the shop in St Emilion or to the market in Libourne you glimpse eerie silhouettes through the mist in the vineyards, bent over and moving slowly through the vines. Pruning has begun in earnest in the last week in the vineyards around the house.

During the winter months the sap from the vines descends into the root system and the vine becomes inactive, making this a perfect time to prune back the excess branches. Pruning takes place between the months of November and March. Late pruning is preferable as pruning pauses the growing cycle and the vine is thereby less exposed to the late spring frosts experienced in Bordeaux. For the smaller vineyards late pruning is possible, for the bigger vineyards this is usually not a viable option.

A seasoned pruner will need five days to prune a hectare populated with 5000 vines, averaging 1000 vines per day. Cabernet vines are slower to prune than Merlot vines. Tying up the remaining branches is better undertaken when the branches are wet and more flexible, it is literally four times faster. The costs for pruning a vine, removing the excess branches, and tying up the remaining branches, is roughly €0.26 cents a vine when outsourced. 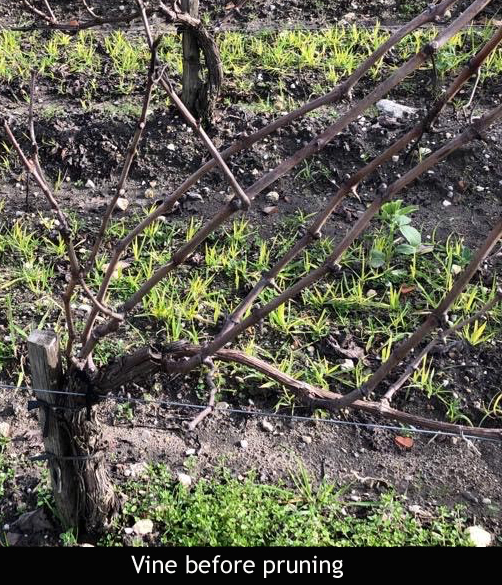 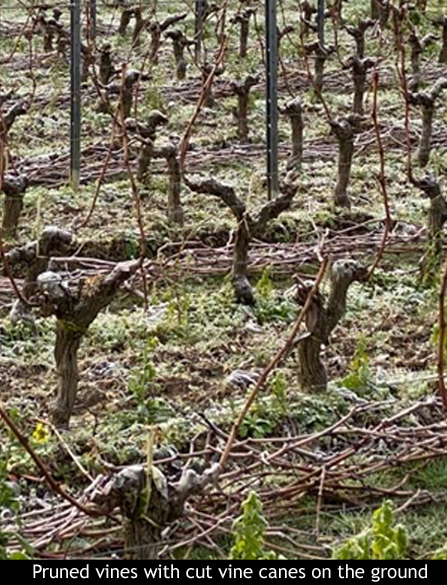 “At Chateau Petit Fombrauge we leave two branches on the vine when pruning with the single Guyot method, one extended branch that will serve for the coming harvest containing around 7 buds, and another much shorter branch for the following year’s harvest containing only 2 buds. The branch for the following harvest will be thicker and stronger when its time comes. It can also provide backup in case the first branch fails for any reason. The pruning is undertaken as low to the ground as possible to keep the vine from over growing.” said Pierre Lavau the owner and winemaker.

When all is completed, sleepless nights ensue when the bud breaks as a late frost will have a devastating impact on the flowering plant. In 2017, on the 28th of April, frost wreaked havoc in the vineyards of Bordeaux.  Our winemaker in Margaux, Christophe Landry, could only watch on as his vineyard was covered in frost, wiping out his entire production for that vintage.

Thankfully late frosts are not the norm in Bordeaux.